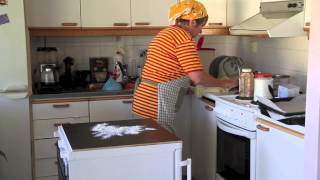 Finland has a long tradition of using wild berries, which grow in abundance in its forests and swamps (picking natural berries is a public right in Finland). Being common and easily preserved, lingonberries are widely used. They are still the most important wild berries in Finland.Sour dairy products are also characteristic of Finnish food culture. In the old days, fermentation was the only way to make milk last longer in poor storage conditions. Largely originating in Russia, fermentation and sour ingredients feature most strongly in the culinary tradition of eastern Finland. While sour milk is used across Finland, there is a clear difference in texture between eastern and western sour milk.Berry pies are a typical delicacy of the Finnish berry season, lasting from July to October. Various types of pastry are used, such as sweet bun dough raised with yeast, shortcrust pastry, puff pastry or variations of these. Flour other than wheat flour can be used, as in this lingonberry and sour milk pie.

Dough: Grease a pie dish. Beat the butter and sugar together until creamy. Add the egg. Mix all the dry ingredients together and add into the dough. Add the sour milk and mix. Spread the dough into the pie dish. Filling: Fill the dough with the lingonberries. Mix all the topping ingredients well and pour evenly on top of the berries.Bake at 200°C for 30 minutes.